The need to set the record straight and tell his story.

Bill was my father's best friend and when Bill died in 1971 at the age of 43, my father married his wife Jacquelyn.  Together they did their best to keep Design Line, Inc. alive. The 70s weren't kind to a design company so rooted in the 1960s, so they packet up the remaining inventory and called it quits in 1977. Sadly, Jackie died a few years later in 1985.

Now decades later, my father dusted off a box of Bill's work and its contents - photographs, blueprints, sketches realized and unrealized, letters, writings, brochures, and clippings will help me tell you about Bill Curry and Design Line. 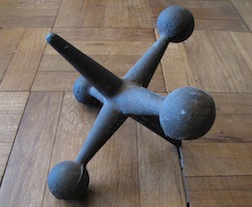 And as for setting the record straight, the Jack bookend (cast-iron prototype shown) is often incorrectly attributed to George Nelson.  Design Line, Inc. produced a 6" 3 lb rough iron casting in 12 colors which sold for $7, the brass were $9, and a slightly larger 9" 9 lb version was also produced.
at 4:20 PM